Learn about the life & times of courageous Abolitionists,

Conductors lead guests to 12 historic sites, including 4 with authentic connections to the    Underground Railroad.  Groups depart from Lancaster City Visitor Center, 38 Penn Square, Lancaster, PA 17603, beginning at 11 AM and 2 PM. The tours last approximately two-hours.  No reservations are necessary. Please arrive 30 to 15 minutes before departure times.

This tour series began in 2016 and is a collaborative effort with the City of Lancaster Office of Promotion and in partnership with Historic Lancaster Walking Tour, which has been conducting history tours of Downtown Lancaster since 1976. Other community groups in partnership are LancasterHistory, Lancaster Mennonite Historical Society and Thaddeus Stevens      College of Technology. For a tour preview, visit – https://www.aahsscpa.org/walking-tours

Tour last two hours and depart from the Visitors Center in Downtown Lancaster, opposite the Lancaster Marriott Hotel and Lancaster County Convention Center

If you go. No reservations required. Be there 15 minutes before departures

Visit www.visitlancastercity.com for other event information and directions to the Visitors Center Downtown, 38 Penn Square, Lancaster – 17603.  Also, for more information contact Randy Harris at 717-808-2941 or at rjharris441792@gmail.com 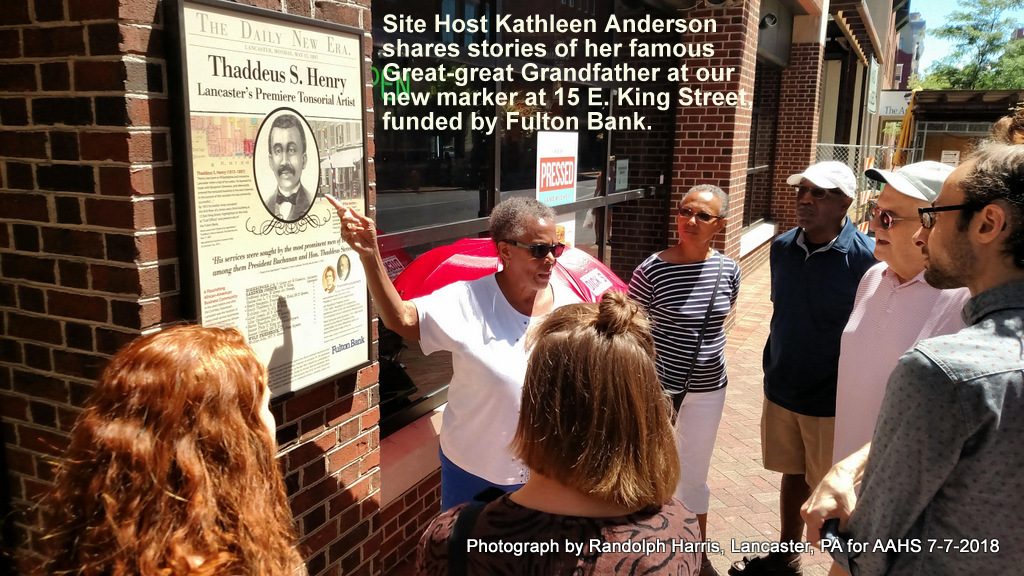 This initiative is a collaboration among the African American Historical Society, LancasterHistory, the City of Lancaster Office of Promotion, Historic Lancaster Walking Tour, Inc., along with other local partners and supporters. 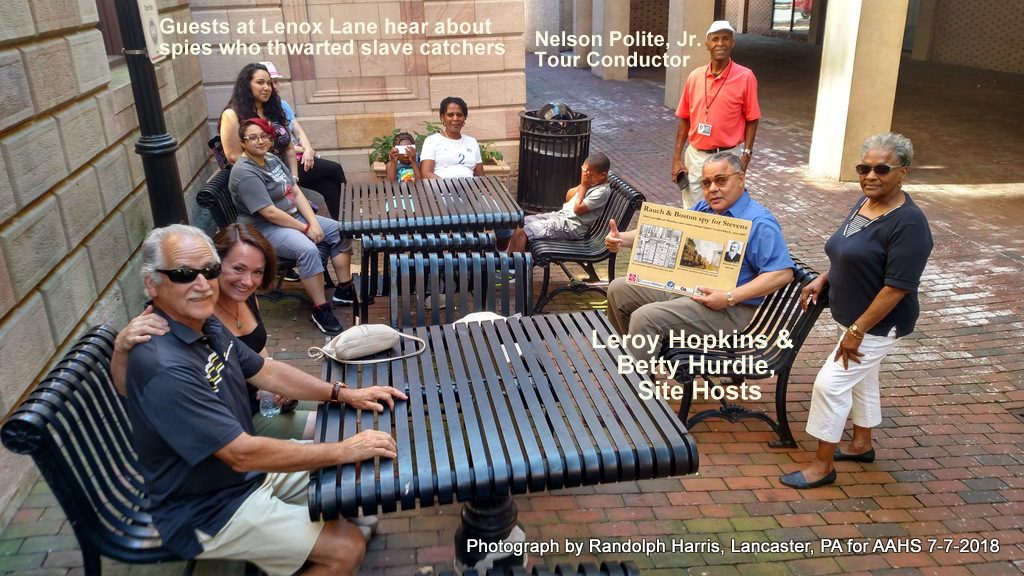 Through these tours, visitors will learn about the early days of the African American experience in the City of Lancaster and the wider community. The tours explore the period immediately following the American Revolution, when an increasing number of people of African descent fled enslavement in the South and found some areas of Lancaster County welcoming and supportive of their situation, including nearby Columbia, some farm families in Southern Lancaster County, and in the City of Lancaster. During the early 19th century in the City, a remarkable period emerged when African Americans began to establish themselves as entrepreneurs and founders of Black faith communities as they faced segregation in seating during worship in mainstream churches.  But they also found supportive members of the clergy in some majority churches, as well as assistance and encouragement from some business owners and political leaders. Of course, they continued to face many challenges and obstacles because of their race among the wider community. 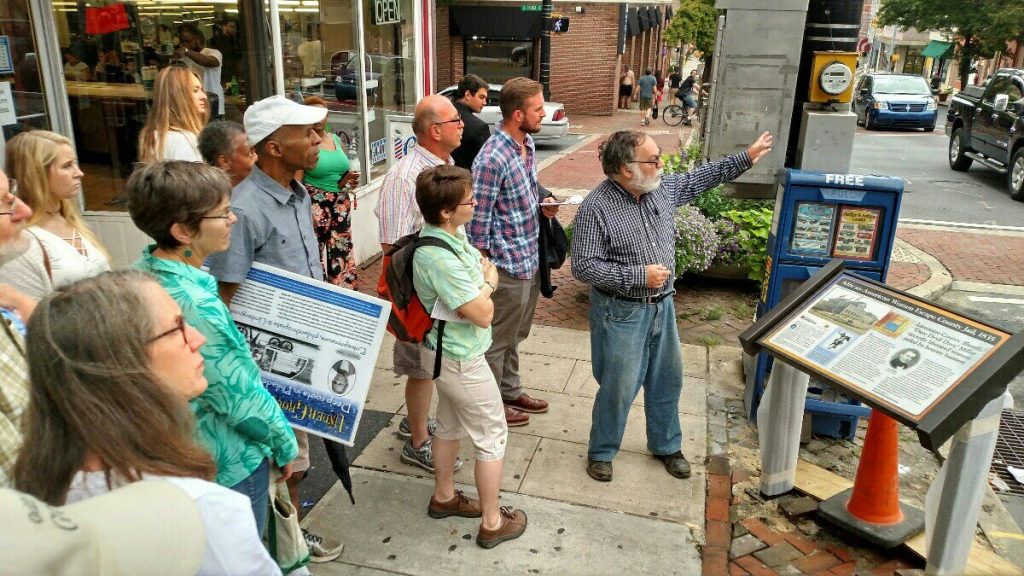 Visitors will join tour conductors who will guide their guests along an outstanding tour route, following busy roads, down narrow alleys; through cemeteries and in quiet churches, sharing stories for the first time in a thematic concerted way. These are stories seldom heard beyond the intimacy of  local families and read in only a few history books. 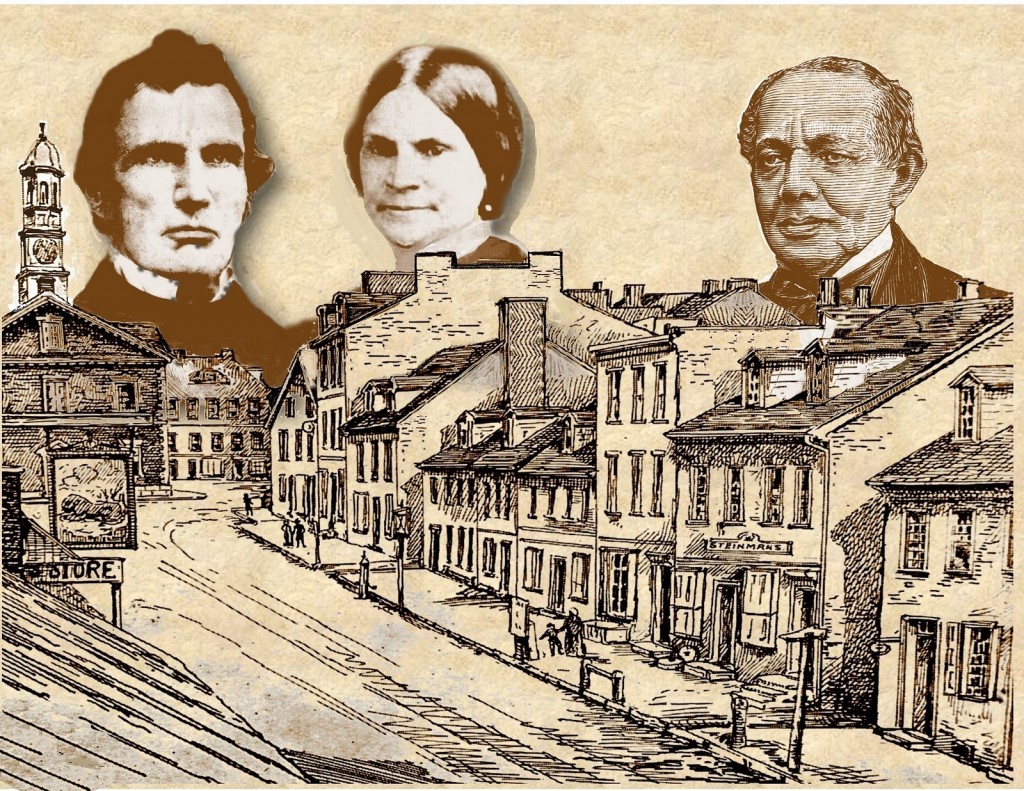 West King Street, Lancaster, PA, view east, about 1850, showing US Congressman Thaddeus Stevens, his property manager and confidant, Lydia Hamilton Smith, along with William Whipper, civil rights advocate and African American entrepreneur from Columbia, Lancaster County who concealed  freedom seekers in his railroad freight cars and secretly transported them some 80 miles from Columbia to Philadelphia, from about 1838 until the late 1850’s.

On this tour, the four-square block area of the center of the City of Lancaster, Pennsylvania becomes kind of “learning laboratory,” an historic urban landscape where a community’s heritage can be explored in a new and compelling way.  This history will be shared as a blend of cold hard facts, with leads and suggestions to delve further into connected oral traditions and legends. The hope is that new theories and avenues of original research can emerge from these first person experiences. 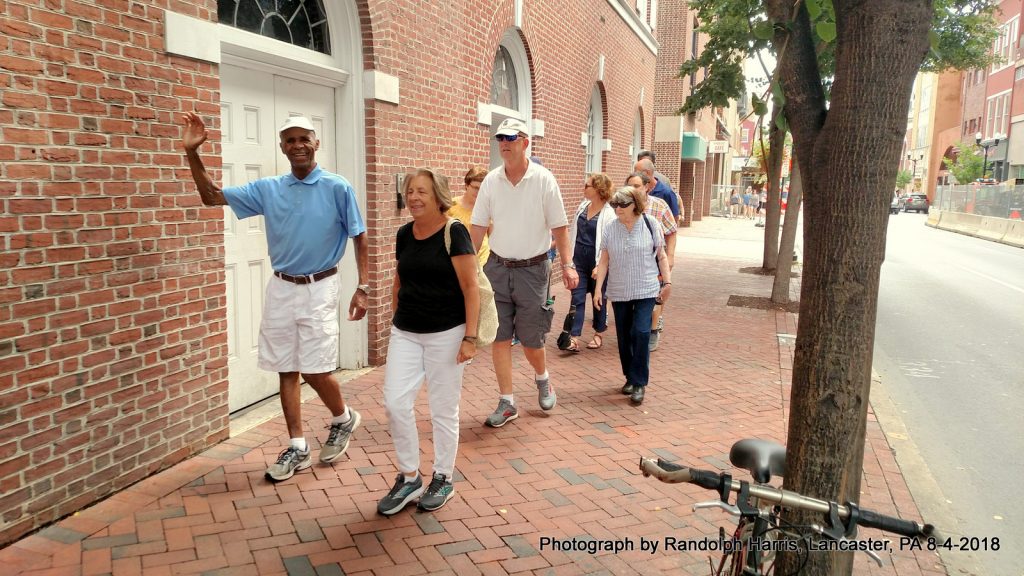 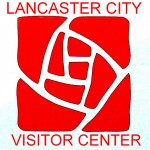 If the 2020 season re-opens, it will mark the fifth consecutive year these tours have been conducted by volunteers of the African American Historical Society.  During the previous seasons,  guests said they were pleased to be able to take the leisurely walking tours and discover many new chapters in community history at some of the exact locations where notable people lived, or where significant events played out.  They also visited places where other folk — not so well known — accomplished things notable and sometimes infamous.

Other guests said they were able to learn more exciting details about people and events with which they were already familiar.

Many guests heard for the first time that a sitting US Congressman from mid-19th century Lancaster was “the spider in the web” of what was then criminal activity.  Congressman Thaddeus Stevens covertly hired agents and spies to thwart, oppose and  eventually help to defeat slavery, “the peculiar institution” that for hundreds of years before had legally allowed a majority of citizens to own and use other humans. 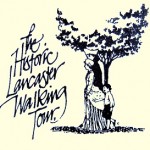 Guests also hear about the core role of some of the oldest houses of worship in Lancaster — reaching back to Colonial American — where both the enslaved and enslavers worshipped alongside free people of African descent.

At these worship sites, schisms over race, income status and styles of worship resulted in new faith communities where paths emerged toward social and economic equality for people of African descent.  These pathways were promoted in the public square through a growing group of 19th century black-owned businesses, and through such secretive means as the Underground Railroad which proliferated here.

Proceeds from the tours benefit the program activities of the African American Historical Society.

To better illustrate the people and places central to this history, tour organizers are planning to raise funds through these guided tours to design and install historical markers at various place along the route. These markers will feature portraits of historical characters, photographs of buildings and maps and other historical information. Organizers plan to install up to 25 markers of various sizes, shapes and designs throughout the City over the next three years. Over the previous two years, 9 markers have been installed and 3 are in the research and design phase.

This series of tours has been organized to provide guide training for community residents who have an interest in local history.  When engaged as regular tour conductors, these guides may receive stipends for their participation.

These tours are an expansion of the existing tours conducted from the Visitor Center by Historic Lancaster Walking Tours, a volunteer-supported service that has been in operation since 1976.

Also working with the African American Historical Society of South Central Pennsylvania on this heritage tourism program, in addition to LancasterHistory.org, City of Lancaster Office of Promotion, and Historic Lancaster Walking Tour, Inc. are the following supporters and collaborators: Thaddeus Stevens College of Technology; Lancaster Mennonite Historical Society; and the Shreiner-Concord Cemetery Foundation.

Tours start at City of Lancaster Visitor Center, 38 Penn Square.  Generally tours will be conducted in groups of 10 to 15 guests, depending on volume. Here are some of the featured tour sites.

On the threshold of the Civil War numerous black-owned businesses were active on and near this square, with many owners involved in public affairs. In the City’s 1859 Business Directory, there were 16 barbers in Downtown Lancaster, nine of whom were of African descent.

See the site where Mr. Henry, the 19th century barber of choice of President James Buchanan and his political arch-rival, Congressman Thaddeus Stevens, as well as other community leaders, conducted his tonsorial skills.

3)  Thaddeus Stevens and his “Freedom Spies.”

The secret  work of Edward H. Rauch (1820-1902) and Robert Boston (circa 1814-1888) illustrate how the Underground Railroad Movement operated across racial lines.  Rauch, a white employee of the County Courts, and Boston, an African-American barber whose shop was near the Court House, were spies for Stevens. They gathered intelligence about the activities of the notorious slave catcher, George Hughes, who operated from an office in the first block of West King Street, opposite the City Visitors Center. They relayed their inside information to Thaddeus Stevens, who then warned his associates who were sheltering freedom seekers that slave hunters were targeting them. This collaboration of “Freedom Spies” was never discovered until news stories in the 1880s disclosed the details.

Early 20th century hotel was the only commercial establishment in the City where people of color could rent a room. Some clients were traveling actors at Fulton Theater and others were Black baseball players.

Stevens was a leader of Radical Republicans during the Civil War who pressed for equal rights for African Americans.  Lydia Hamilton Smith, a woman of color, was Stevens’ property manager and personal and political confidante, both here and in Washington D.C. Oral tradition has long held their support for freedom seekers on the Underground Railroad.  Their property, along with the adjacent Kleiss Tavern (now within Lancaster County Convention Center), was verified in 2011 as an authentic Underground Railroad safe house, circa 1850. Also, an archaeological dig is on display where intriguing artifacts were uncovered and are believed to have supported regular efforts to conceal and shelter freedom seekers from the many bounty hunters who trekked to Lancaster to capture the formerly enslaved.

An early house of worship in City of Lancaster; ministered to free persons of color and the formerly enslaved. Rev. Christian Endress gave the dedicatory sermon at the African Church (today’s Bethel A.M.E.), February 1821. Rev. Krotel spoke from the pulpit here in the 1850s, in support of anti-slavery beliefs and actions.

Site of Thaddeus Stevens’ famous speech on Reconstruction, 1865 and massive rally in 1870 to celebrate the enactment of the 15th Amendment to the US Constitution, expanding voting rights.

William G. Payne, well-known African-American restaurateur and caterer also served for many years as chief steward at the exclusive Hamilton Club before that organization moved to its current location at N. Duke and E. Orange Streets.  After his years of employment at the Club, Payne, who was born enslaved in Virginia in the late 1840’s, established the successful Lancaster Kitchen and Caterers’ Supply Co. at 137 E. Grant Street. He also operated other restaurants in the City during the late 19th and early 20th centuries.

9) Speeches by Bayard Rustin at YWCA

Enslaved Africans, free Blacks and slave owners worshipped here. Major Thomas Boude, (1752-1822) a veteran of the American Revolution and one term US Congressman was involved in an anti-slavery uprising in 1804 in Columbia, Lancaster County,  which has been described as “the incorporation of the Underground Railroad.”   Dinah McIntire, a fortune teller, owned property in the 300 block of West Vine Street, which became known as “Dinah’s Hill.” She was enslaved by Revolutionary War Col. Matthias Slough, owner of the White Swan Hotel on Penn Square. Dinah was buried here May 5, 1819, reportedly at the age of 113.  African-American members established a separate congregation in 1817; first known as Saint James African Church and later, in the 1840’s, became Bethel AME Church. Rev. Samuel Bowman (1800-1861) planned for his black maid, Louisa Wells, to be buried in family plot, 1867.

City’s main train depot from 1834-1930 was part of the Philadelphia & Columbia Railroad, the second railroad chartered in the US.  By 1838, box cars fitted with false ends owned by Columbia’s noted black entrepreneurs, William Whipper and Stephen Smith, transported former slaves to Lancaster, Philadelphia and destinations north, thus becoming a key pathway of the Underground Railroad. Right of way relocated to northern City line, circa 1930.

The only public cemetery in Lancaster that accepted burials of all people, regardless of race or religion. Stevens chose his burial place here, along with U.S. Colored Troops and other veterans, mostly from the Civil War. Stevens chose a plot adjacent to an area of the cemetery where indigent people were buried, often in unmarked graves.

Recent research has revealed that in the late 19th Century, an African American man served as Market Master. As late as 1910 African Americans owned $58,200 in property in rural areas of the county (in the City of Lancaster it was $65,000). Central Market was one of the markets where they sold their produce and other farm products.